THIS ARTICLE WAS ORIGINALLY PUBLISHED IN FORUM 38: 18-19

Working in groups is one of the most productive forms of active learning. It maximises opportunities for each class member to play a part. Skills can be shared and concepts examined from a variety of perspectives. Moreover, learning becomes a social activity and a base from which to develop broader life skills: collaboration, leadership, decision-making, trust building, conflict-management.

Given the cosmopolitan and diverse nature of the student community, this kind of interaction may involve working with learners of a different nationality, mother tongue or culture, not to mention gender, generation, social background or life experience. This does, of course, present challenges but also an opportunity to broaden outlook and to prepare for the ‘global’ society in which the current generation of students will live and work. Group work is thus a vital part of the HE curriculum but, ironically, as Mills and Alexander (2013) point out:

In many HEIs small group teaching is apportioned to the institution’s least experienced teaching staff… This means that some of the most intimate and complex of teaching practice… is the responsibility of those who are often least experienced and lowest paid.

What, then, are the complexities of small group teaching and how can the multicultural make-up of the average classroom be made an asset in this process rather than a liability?

A shortcoming that is often identified in this area of teaching is that groups are self-selecting. A large-scale survey of UK students (Osmund & Roed, 2010) concluded that ‘‘[they] preferred to choose their own groups and would often choose people with the same ethnic background because they felt comfortable and able to communicate well.’ The obvious response to this situation is for teachers to assert the right to decide who works with whom, thus ensuring a greater balance of skills, backgrounds and personalities among groups.

However, even in the most balanced groups, the more vocal, ‘pushy’ students may well try to dominate. Mills and Alexander (2013) suggest that this may not simply be an issue of individual personality. ‘Power relations’ that exist in wider society, whether relating to gender, age and social status or language and national background, inevitably creep into the classroom.

Some educationalists, (e.g. Johnson & Johnson 1997) argue that, in fact, conflict in any new social structure is inevitable and this should be accepted as a normal part of class behaviour. Groups are thus allowed to move through the so-called stages of forming, storming and, once a kind of hierarchy has established itself, norming. If this may sound a little

like an academic version of a reality TV show, there are alternative approaches, the simplest being to establish principles of collaboration and equity from the outset.

One excellent guide on establishing a cooperative ethos in the HE classroom is ‘Finding Common Ground.’ The author (Arkadis, 2010) advocates using class tasks ’that require students to communicate and engage with peers from diverse backgrounds… in order to consider or compare different perspectives on an issue or topic, and to then critically reflect on the group process.’

Making the most of diversity

Arkadis provides a number of examples of such activities but perhaps an application from closer to home might clarify the approach better. The topic chosen for a structured discussion in a CELT module this year was that of the voting age. Conversation focused initially on the British context: sixteen year olds participating in the Scottish referendum and the case for extending this precedent to the wider electorate. The international make-up of the groups, however, gave a scope to the discussion that would not have been possible in a class of ‘home’ students. Germans were able to outline the pros and cons of the system in their own country, where the voting age in local elections is lower than in federal and national polls. Brazilians related their populous country’s experience of granting the vote to all citizens sixteen and above. Chinese class members, on the other hand, expressed misgivings about the ‘umbrella’ movement in Hong Kong where they felt that the young had been easy prey for manipulation by ‘subversives.’ I did not accept all the points made but, as a British voter, I found the whole conversation illuminating and one which provided a multi-faceted dimension that would have been unavailable through reflection upon the texts alone. 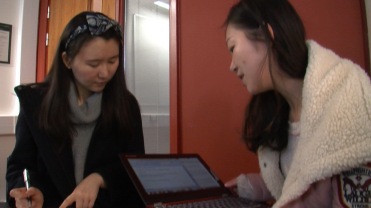 This task was, in fact, part of the module assessment and this underlines the recommendation Arkadis makes: that if a commitment to group interaction is to be demonstrated, then it has to be credited in assessments. In the task on voting age, marks were awarded for both individual performance but also for how successfully the group as a whole collaborated. An incentive was thus provided for both individual performance and team work.

Using current events as a stimulus for interaction in a diverse group may be particularly appropriate in, say, Humanities or Social Sciences. However, in any discipline, the allotting of specific roles to individuals can help engender collaborative working. An example of this is the Reading Circle activity that is currently being used in CELT classes for Education students.  This again focuses on the standard seminar task of preparing a reading text for discussion. However, in addition, each group member is given a specific role and responsibility: discussion leader, text summariser, connector, vocabulary expert or text analyst. This not only encourages active participation by all but also integrates reading, speaking and communication skills, all in the context of critical thinking.

These are a few ways of refreshing group work and turning the international composition that most classes now have to an advantage. At the Learning and Teaching conference, I will be showing video of different classes at the university with contrasting combinations of students, engaging in a variety of tasks. Hopefully, this will stimulate some productive discussion from colleagues about how the current crop of students can play an active role in the international classroom.

Chris Copland is a Senior Tutor in the Centre for English Language Teaching.  He has also taught for the Universities of London and Hong Kong, as well as for the Open University. One of Chris’s professional interests is Educational Technology and he has been granted the English Speaking Union President’s Award and a U of Y Rewarding Excellence Award for the recent work he has done on digital video, in collaboration with Huw Llewelyn-Jones. Chris is a Consumer Representative at the National Cancer Research Institute.

One thought on “Effective group work in the multi-cultural classroom”